My darling 8 year old niece called last night and had a lengthy pitch prepared just for me. It was entitled "How to convince my dieting aunt to buy more than one box of Girl Scout cookies". She started out with her sweet little voice telling me that she was calling to see if I'd like to buy cookies from her. She had me at hello. If that was not bad enough, she went on to describe, in details, each cookie from Thin Mints to Tagalongs. She was killing me. Literally. Who could resist an 8 year old trying to pronounce Dulce de Leche and Trefoils. Seriously... I don't know if I could correctly pronounce Trefoils.

Okay, so the point is, I bought 3 boxes and was told I'd have to wait until late February or early March for the cookies. I got one box of Shortbread, one Samoa, and one Dulce de Leche. 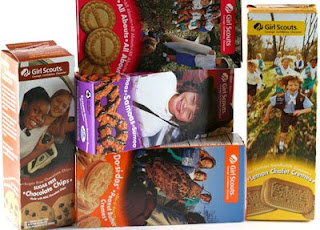 If I decide not to inhale the entire box of Samoas, I will definitely be making this dessert. Be still my heart. Late February or early March cannot come fast enough. 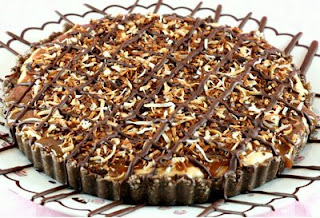 1 box Samoa cookies
3 tbsp. butter, melted
1 8-ounce package cold cream cheese
1 8-ounce container cold mascarpone
1/4 cup granulated sugar
2 cups dulce de leche, divided
1 cup flaked coconut
4 ounces bittersweet chocolate, melted
..
Process the cookies into crumbs in the food processor. If you don't have a food processor, put them in a plastic zipper bag and beat the hell out of them until they turn into crumbs. Mix the crumbs with the butter in a bowl. Press the crumbs into a 9 or 10 inch tart pan, preferably one with a removable bottom. Chill for at least 30 minutes.
..
In another bowl, combine the cream cheese, mascarpone, sugar and dulce de leche. Beat on medium speed until well-blended, about 2 minutes. Pour filling into tart shell and chill for at least 2 hours.
..
Meanwhile, toast the coconut by heating it in a small skillet over medium to medium-high heat, tossing it often so it doesn't burn. When the coconut is golden brown remove from heat and set aside to cool.
..
When tart is thoroughly chilled, spread the remaining cup of dulce de leche over the filling, gently spreading it to cover. Be careful not to mush the filling. Spread the toasted coconut over the dulce de leche and drizzle with the melted chocolate. Circa 1985. Yours truly as a Brownie. Do they still have Brownies or is everyone a Girl Scout? 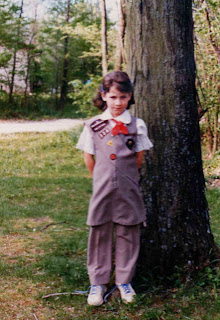 Recipe and photos of dessert via Sticky, Gooey, Creamy, Chewy
Posted by Melinda at 8:00 AM

so cute! yes they still have brownies. :)

Widgets for Etsy Sellers
Powered By